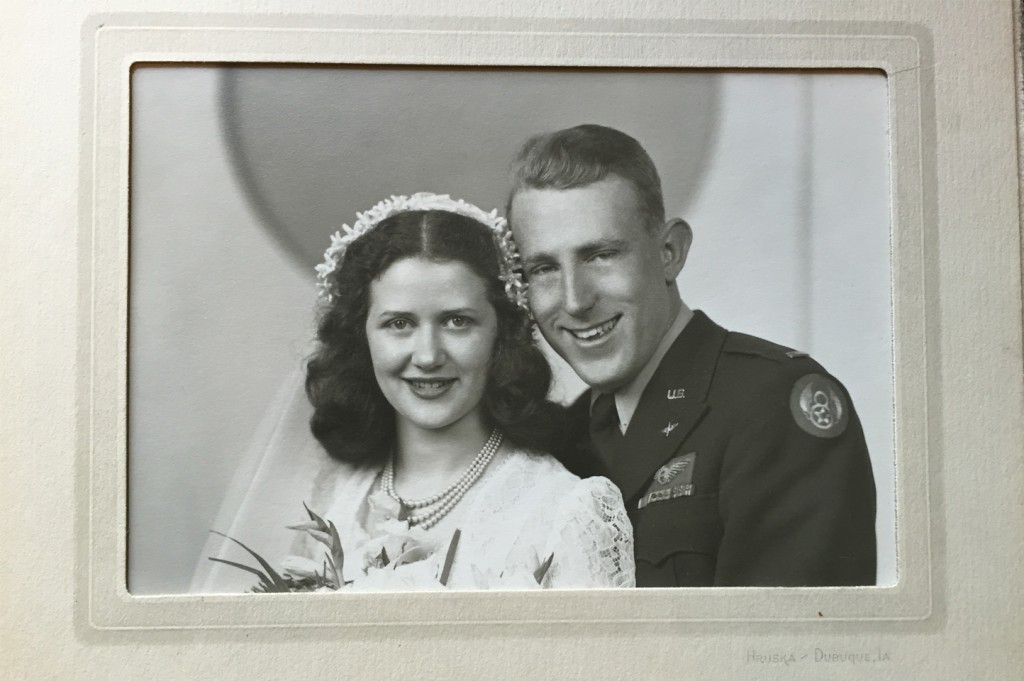 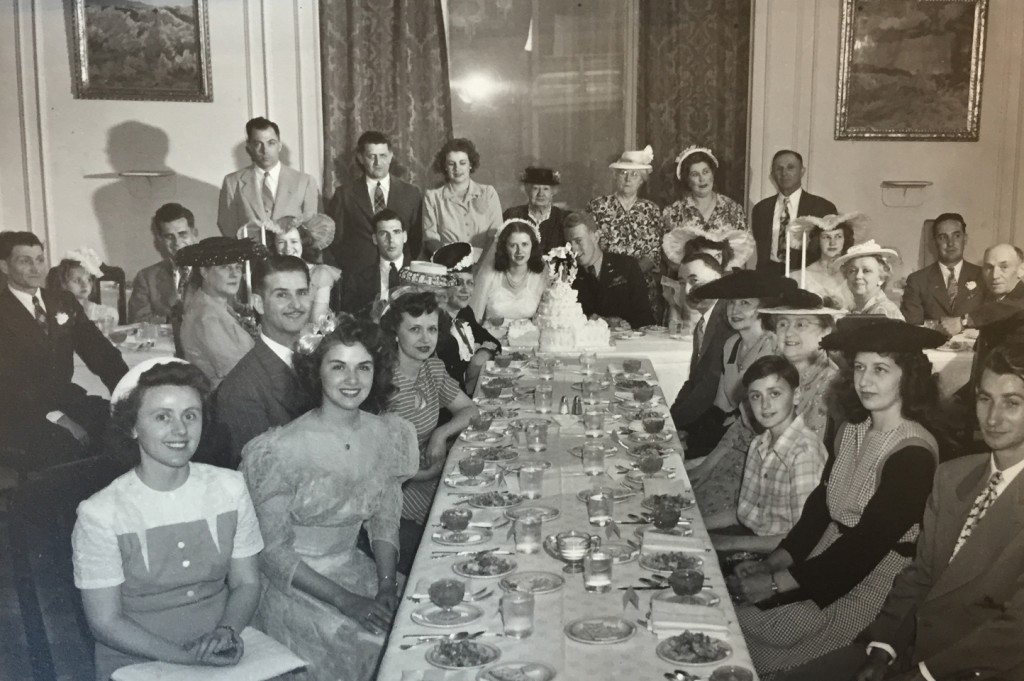 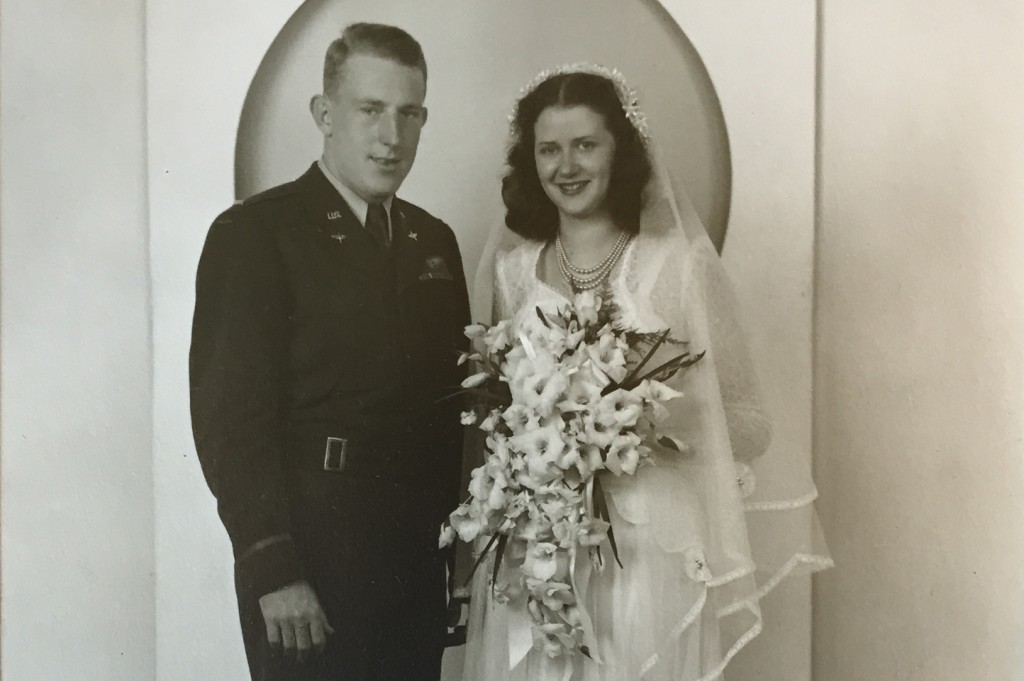 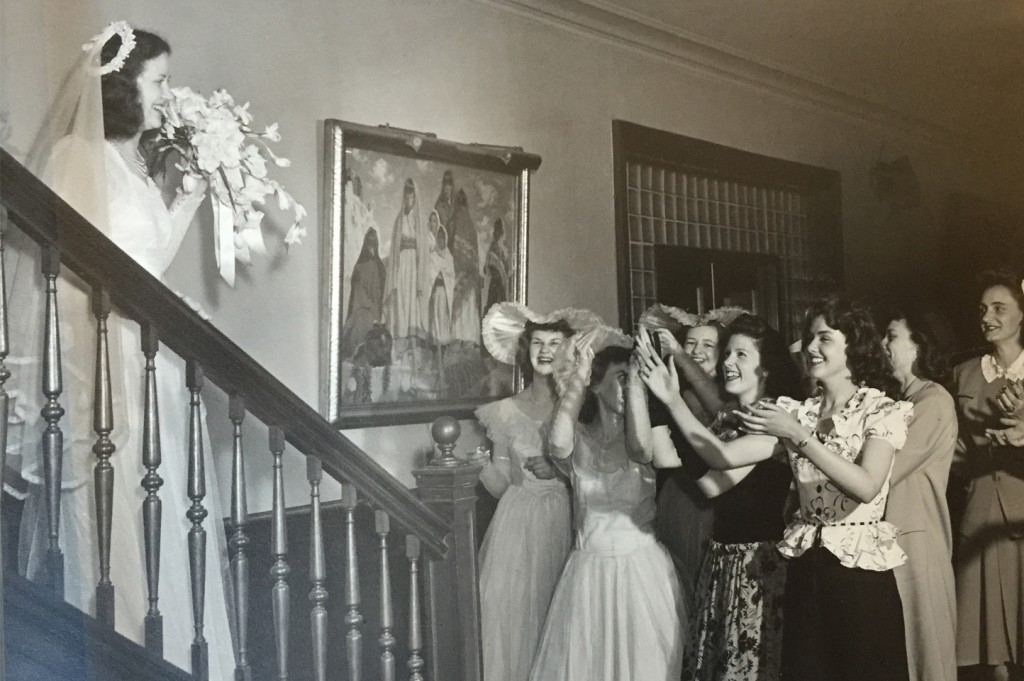 At Hotel Julien Dubuque, we have the distinct pleasure of welcoming incredible visitors through our doors on a continual basis.  Every guest brings with them a story that contributes to the collective narrative of this historic hotel.

For Eunice Grabow, returning to Hotel Julien Dubuque was like stepping back in time to her wedding day in 1946. “It all really does come back to you,” she noted excitedly as she toured the hotel.  Despite extensive renovations and well over half a century’s time having passed, Eunice, accompanied by her daughters Diane and Nancy, reminisced about that special June day nearly 71 years earlier as she visited familiar, albeit transformed areas of the hotel. “That’s where I threw my bouquet,” she explained, pointing to the Grand Staircase.

As we sat down near the front windows in the lobby, Diane and Nancy shared beautiful photographs from their parents’ nuptials.  The images of the happy, young couple sparked an amusing story about how they met.

Joseph, Eunice’s husband and son of Dubuque’s Recreation Director, worked as a lifeguard at the city’s first municipal pool during his high school years. In an effort to attract his attention, Eunice and a friend climbed on the ropes that divided different sections of the pool, intentionally breaking a rule that they knew the lifeguards must enforce.  After being corrected on a few different occasions and pushing the envelope even further by entering an area not open to the public, Eunice and her friend were sent home from the pool and, in perfect accordance with their clever plan, were driven home by Joseph.

Both Eunice and Joseph grew up in Dubuque.  Eunice graduated from the Immaculate Conception academy and went on to work as a bookkeeper at Edwards’ Style Shop, the store from which she would eventually purchase her bridal gown.  Joseph attended St. Columbkille’s High School and graduated from the University of Iowa before joining the Army Air Forces in March of 1942.

(An interesting aside: Eunice’s brother, Art Roth, helped to build the Julien Dubuque Bridge while he was in college.  Construction began in 1942, during the height of the World War II when facilitating military transportation was of the utmost importance.)

As if Eunice’s stories were not already fascinating enough, she proceeded to explain that, prior to their marriage, Joseph was recognized for his heroism during World War II.  Her daughters shared a newspaper clipping praising their father’s success in navigating his team’s B-17 to safety after being bombed over Germany:

“Through a hall of German anti-aircraft fire, Second Lieut. Joseph C. Grabow, 21, of Dubuque, Ia., navigator of the B-17 Flying Fortress, plotted a course for the crippled plane.  After Nazi flak gunners shot one engine of the Fort away, the plane did not have enough power to hold her place in the Eighth air force formation, with which Lieut. Grabow was flying.

Lieut. Grabow navigated a course for the crippled Fort which proved to be a successful one.  After two hours over Germany, the craft, with two engines ineffectual, made it safely to home base.”

When Joseph returned from the war, he had much to celebrate.  On June 5th, 1946, Joseph and Eunice were married at Holy Ghost Church.  In a Telegraph Herald article saved by the family, the events of Eunice and Joseph’s wedding day are described in detail:

“Given in marriage by her father, the bride wore a gown of white chantilly lace and net, fashioned with a lace bodice, a scalloped peplum and a very full net skirt.  Her fingertip veil featured lace flowers and pearl insets, and she carried an arm bouquet of white gladioli…Following the wedding breakfast at the home of the bride’s parents, a dinner and reception for 300 guests were held in the Art Room of the Hotel Julien.”

(Note: The “Art Room” mentioned in the excerpt refers to what is now known as the Harbor Gallery.)

As we continued flipping through photographs from her wedding day, Eunice fondly described the smiling young faces in her wedding party.  Her daughters shared stories with such an air of familiarity that it became clear the wedding day memories had been relived during many family conversations throughout the years.

Our visit was marked by a palpable sense of nostalgia, a true reflection of the significance of Eunice’s return trip to Dubuque.  Her daughters planned a reunion dinner in Caroline’s Restaurant for around fifteen people, many of whom were Eunice’s former classmates.  It was then that this amazing history started coming out of the woodwork and, had it not been for a friendly conversation with our Restaurant Manager during their dinner, the fascinating details of Eunice and Joseph’s 300-guest wedding reception at Hotel Julien Dubuque in 1946 may have simply remained frozen in newspaper clippings, photographs, and records from the past.

A mother to three: Keith, Diane, and Nancy, grandmother to four, and great-grandmother to two, Eunice now resides in Tucson, Arizona and continues to cherish the many memories that she made in Dubuque.  She shared as many stories as time would allow for in the hour before she and her daughters left to visit New Melleray Abbey and stop for lunch before their flight.  “Dubuque truly was a wonderful place to grow up,” she concluded.

Do you have a special Hotel Julien Dubuque memory to share? We’d love to hear from you! Email dmm@hoteljuliendubuque.com.